The new Star Wars: Rise of the Resistance attraction at Disneyland and Walt Disney World is an amazing experience – but the stress in even just trying to get to experience it is enormous, especially if you only have a limited number of days to even try. So here are some tips to help you out that worked great for us, based on data gathering and some technical knowledge. We made two real-world attempts and we got boarding group 4 on our first attempt, and 2 on our second attempt!

The fine folks over on the DISboards have been experimenting and gathering reports for months, and collected it all in in the first two posts of this thread, and most of what you need to know of is right there but I’ve added a few tricks of my own. Now, bear in mind, things can change all the time so before your trip I’d review those two posts and maybe the last few pages to make sure of the procedures. I’m pretty sure this system is temporary but we don’t know how long it will be in place.

I’ll mostly be talking about the attraction at Walt Disney World, but currently the procedures are much the same for Disneyland.

Rise of the Resistance is not using Fastpass+ or even a Standby line. The only way to experience the attraction is to join the virtual queue system they are using by getting what is called a “boarding group”. With the popularity of the attraction and the busy crowd currently spurred by the whole of the Galaxy’s Edge area, there is a very short window in which to get a boarding group number – as little as a couple of minutes but on average about 35 minutes.

It is important to note also that this system is 100% disconnected from Fastpass+ – having three Fastpass+ selections already does not affect your ability to get a boarding group, and vice versa.

A boarding group (BG) itself is a number that gets “called” for boarding, after which you have a certain amount of time to return to the attraction to experience it, so you can do other things in the meantime. The window to return is typically two hours but sometimes, especially at the end of the day, it may be only one hour. The lower the number, the earlier you will experience the attraction.

There are two types of boarding groups as well. “Regular” groups and “Standby” groups. Regular BGs are somewhat guaranteed – there may be unforeseen circumstances where not all regular BGs get called. If that happens, guests with uncalled regular BGs will typically get some sort of compensation – that usually consists of an “anytime” Fastpass to return the next day, and possibly a one-day ticket in case you didn’t have another day’s admission to return. A standby BG has no compensation, but depending on your number you may still have a good chance of experiencing the attraction. Since February 4th (when they appeared to change how they allocated BG quantities and group sizes) they have not failed to call a regular BG. The big thing is that regular BGs are typically all snatched up in less than 2 minutes.

No one knows how many people exactly are in a boarding group, or how they are handed out. They seem to be fairly sequential based on how quickly people pick them up, but I believe the number of people per group is pretty variable, based on how fast they need to give out the groups and don’t have time to find slots for the group of two in an earlier group, etc. I think they just have a rough number that once filled it goes on to the next, and then the next, etc.

There doesn’t appear to be any evidence that someone canceling a BG they already have frees up anything that people can find later. I believe they just let those slots go unfilled and call standby boarding groups that much sooner.

Some interesting facts: Boarding Groups rarely start with 1. For some strange reason, they usually start at 2 and sometimes start as high as 10 or more – 15 was the highest since Feb 4th. No one knows why, but I suspect they leave some “space” to allow for compensation Fastpasses, etc. by reserving that quantity within the system – but there may be other reasons.

The highest regular BG number also isn’t fixed. It generally varies between 50 and 63. We don’t have a reliable way of knowing how many standby BGs are given out on a given day.

How do I get one? The Basics

You MUST use the Walt Disney World My Disney Experience app on your smart device – typically it’s just called “Disney World” in the app store, depending on which park you are visiting. This is the same app where you can manage your Fastpasses, etc.

You and your entire party also must also be IN Disney’s Hollywood Studios in order to get a boarding group. They are letting people into the park early. You must be fully scanned in to the park by scanning your MagicBand or ticket card at the entrance tapstiles. Sorry, but the rest of your party can’t sleep in while you go to the park for this one. You can, however, practice using the app – if you are willing to get up – and get as far as the party selection screen as shown below.

Currently, the home screen when you run it looks like the first image. Selecting either the picture of the AT-ATs or the Find Out More button will take you to the current status screen. 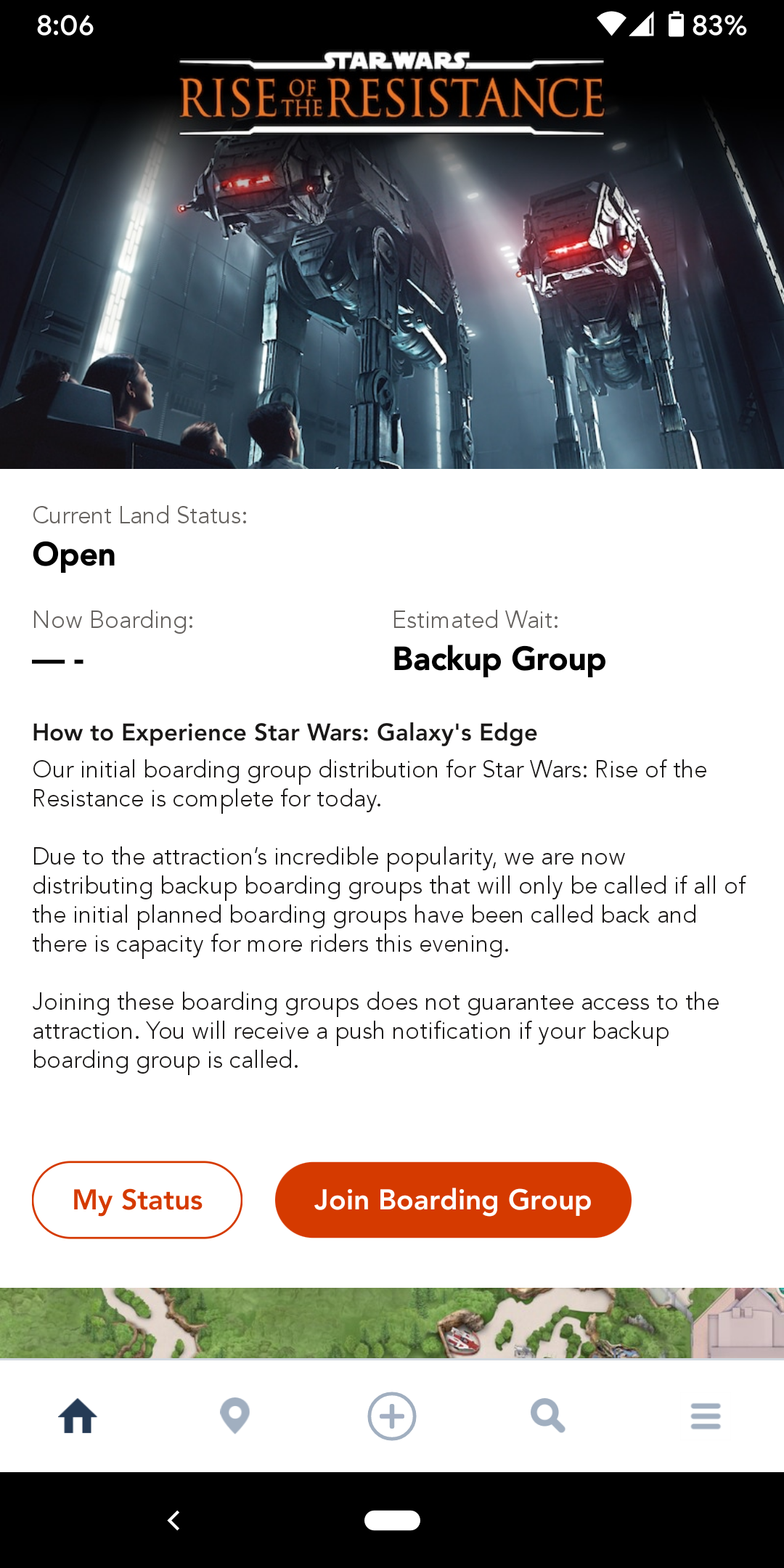 If there are available boarding groups, the “Join Boarding Group” button will be red. The button will NOT turn red until the actual scheduled opening time of the park, even though they may let people in early. So, if the park opening is scheduled for 8:00am, that’s when you can join a boarding group. Not one second before.

Clicking on that will take you to a screen to select the people in your party. Only you will be selected at first – if everyone on the screen is in your party, just hit the “Select All” button, and select “Join a Boarding Group”. 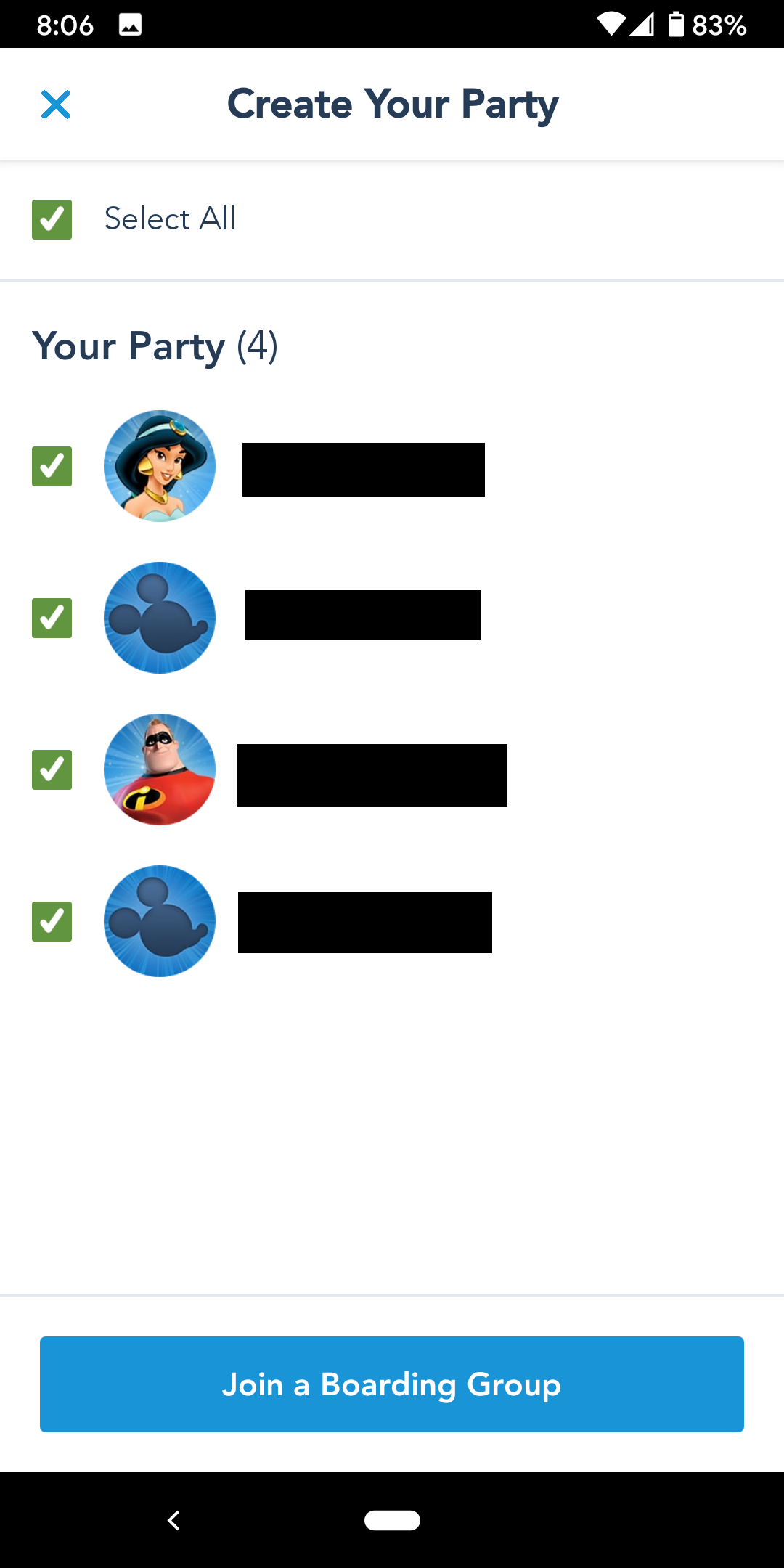 If everyone is in the park, then all should be well. If not, you might come to a screen that shows one or more people that are not registered as being in the park. If they did and it still rejects them, remove them from the list, continue quickly, and then visit one of the Guest Experience Teams scattered throughout the park to get it checked out. They can add them to your boarding group after they verify.

The next screen will tell you your boarding group number.

That’s really all there is to it – if everything goes right. Because technology is involved, there are various ways in which your device, the app, the network connections, etc. can glitch. So next are some tips to help maximize your chances at not only getting a boarding group, but a low number.

How do I maximize my chances?

Glitch happens. It’s just a fact of technology. So here are some tips on what to do to hopefully minimize the impact of any glitches.

Of course, even following these tips glitch happens. Keep trying until it tells you there are no boarding groups available. If the worst case happens and you aren’t able to get a boarding group, have another morning visit planned and try again, maybe trying a different area of the park. If it works for you the first time, then you can come again and possibly ride a second time. You’ll want to.